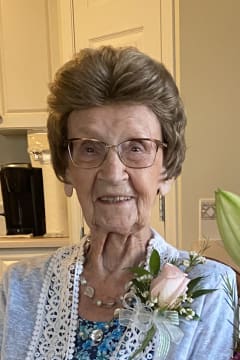 Eileen entered the world April 23, 1922, in Kerrobert, SK, the second of four children born to Delia and Bill Bauerfind. The family’s first years were spent farming on the prairie near Luseland, SK. In the fall of 1934, they moved to Ethel Lake near the town of Cold Lake, staying with family for the winter and then settling across the lake on their own homestead in the spring of 1935. Times were difficult and the family worked hard. Most of them worked outside, planting and harvesting crops, commercial fishing and caring for livestock but Eileen often worked inside keeping the house and preparing meals. She did know how to hunt, though, one day bagging thirteen rabbits with fourteen bullets. Eileen was eager to leave the farm and head to the big city. She hoped to be gone at twenty-one, but she unfortunately missed her train and before the next train left, she had already turned twenty-two.

Eileen so wanted to be a teacher but with a grade eleven education she decided to be a secretary and with her friend, Irma Duckett, trained at home teaching herself to type and take shorthand. Eileen eventually worked at the RCMP headquarters in Edmonton, AB, for a number of years. During that time, she met a handsome young constable named Charles (Chuck/Chasey to Eileen) Hainsworth. They wanted to marry but had to wait until Chuck had completed the required five years of service before they could tie the knot on January 30, 1954. Eileen and Chuck started their family right away with a son named Charlie, arriving in December of 1954, and daughter named Susanne, in April 1957. Eileen returned to work once Susanne began grade school, her longest tenure being at the Canadian Broadcasting Corporation where she retired at 65.

Eileen enjoyed entertaining family and friends alike. She loved to cook and bake, and you would never leave her home hungry. Never a sports person herself, Eileen nevertheless was an avid fan of golf, curling, and especially football, often having strong opinions when her favourite faltered. Eileen and Chuck received a trip to Disneyland for their 25th anniversary and thus began to travel more extensively, going to England, Disneyworld, and Palm Springs multiple times. Eileen was an avid needle pointer, completing large projects, sometimes more than one of the same projects and framing them in beautiful custom frames. She also crocheted well into her nineties.

Eileen and Chuck moved to Grande Prairie in 2010, and made the Emerald Gardens their home. Sadly, Chuck passed away in 2012. They were blessed with seven grandchildren and in more recent years, seventeen great grandchildren with twin girls arriving the day after Eileen passed away. Eileen lived alone and independently to the end, keeping her crystal shiny and her suite immaculate and inviting. She celebrated her 100th birthday on April 23 with a zoom call to the family in Saskatoon and delivering and enjoying a different cake at each of the five families in the Grande Prairie area.

She is survived by her children Charlie (Donna) and Susanne (Vic); seven grandchildren; seventeen great-grandchildren; as well as her sister Phyllis.

Eileen was predeceased by her parents Delia and Bill Bauerfind; her brothers Bill Jr. and Boyd; as well as her husband, Chuck.

Eileen will be buried in Edmonton alongside Chuck.

A Funeral Service will be held on Saturday, July 23, at 2:00pm, at Evergreen Funeral Home and Cemetery in Edmonton (16102 Fort Rd NW, Edmonton)