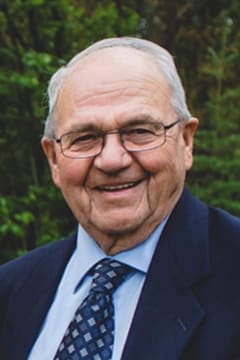 Longtime community member Victor Jean Baptiste Beland, passed away peacefully on Thursday, January 12, 2023, after a brief battle with cancer, at the age of 92 years.

Vic was born on April 19, 1930, to JB and Blanche Beland in Donnelly, AB. He grew up in a close-knit French-Canadian family and community.

He married Joan Kelly of McLennan, AB on August 24, 1955. Upon the death of his father that same year, he took over the family general store supporting his mother and his siblings. He continued in the grocery business throughout his life. He purchased a general store in McLennan in the late 1950’s, and it was during this time he was a founding member of the Super A Foods chain of independent grocers. The McLennan store burned to the ground in 1966. After trying other ventures and much soul searching, the decision was made to move his family of 3 boys: Marc, Michel, and Paul and daughter Nicole to the new town of Grande Cache, AB in 1971. Within a year of moving to Grande Cache, the fourth son, Stephen, was born. Vic always maintained that this happened due to the effects of the mountain air of Grande Cache!

After living in the very close knit and familiar communities of Donnelly and McLennan, Vic was very worried that he might not fit-in, in Grande Cache. This was definitely not to be the case as he and Joan quickly formed many lifelong friendships and he became active in many aspects of community life. Over the years Vic was an active member in many of Grande Cache’s organizations and clubs including the Chamber of Commerce, The Knights of Columbus, the Lions, the Elks, and his beloved Muttoneers, to name a few. He also served numerous terms as a Town Councillor.

Throughout his working life he took great pride in growing his grocery business and in providing the best possible service to the community. He hated having “holes” on his shelves, and on more than one occasion sent his sons on an emergency run to the warehouse in Edmonton, AB, to bring back product needed to fill those “holes” before opening the next morning. After a memorable retirement banquet held in the local Golf Club House, his son Michel took over the store. Vic did his best not to interfere with the daily operations of the store by continuing with his volunteering efforts in the community and with mowing lawns, shoveling snow, and golfing. He greatly cherished the many golf trips that he was included in by friends, even as he grew older and was not as agile on the links. In the autumn season he would head up to the McLennan area to shoot some geese and to visit the farms that he rented out over the years. He loved these farms and the people who worked them, and one of the last things we were able to do as a family was to join him on what was to be his last his “farm tour” this fall.

While working very hard in his business he was always dedicated to his family of four sons: Marc (Wanda), Michel (Jillian), Paul (Loraine), and Stephen (Erin), and his daughter Nicole (Lorne Ternes). He showed boundless patience and compassion as he and Joan cared for son Paul in his long difficult ordeal living with ALS. He was always deeply touched by the great generosity that the community of Grande Cache showed towards his family during Paul’s last years.

Both Vic and Joan have always expressed, and especially in these past few years, how truly blessed they have been to be part of this unique and beautiful community of Grande Cache. And how happy they were that they made that decision all those years ago to move to Grande Cache. They describe it as a community made up of generous, caring people who have always been ready and willing to work hard to make their town a better place to live in. They loved and thrived in this spirit and made many lifelong friends over the years.

Our family would like to thank the community of Grande Cache for the great generosity you have shown to our parents during these difficult couple months. You have made them feel truly loved. A special thanks to the members of the Holy Cross parish including its very kind members from Susa Creek who were so supportive in their prayers and love to our parents and all our family. We can never thank you all enough! We only hope that in our lives we can carry forward the example of loving kindness that our parents and this community have given us all our lives. Thank you, Grande Cache.

Vic was predeceased by his parents Jean Baptiste and Blanche Beland; sister Yvette Beland; brothers and their spouses; Marcel and Mary Beland, Gerard and Lilian Beland, and Roger and Jeanette Beland; as well as his son Paul Beland.