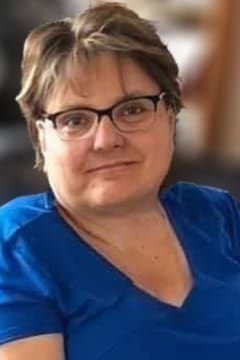 Vanessa Gourlay, passed away Saturday, October 29, 2022, at the age of only 51 years. She passed away peacefully in her sleep the same way she came into this world, under the ever watchful and protective eye of her beloved mother Betty (nee Landry) (Stan) Price. She was so blessed to be also surrounded by her children, husband, loving family, and friends in the days and hours before her passing, even having a chance to Skype many who were unable to be there.

Vanessa was born on a beautiful spring day on April 8, 1971, at the Royal Alexandra Hospital in Edmonton, AB. She was the first of 4 children born to John (Jean) and Betty Landry. Vanessa was lucky enough to be followed by a sister Colette Almstrong (nee Landry); and 2 brothers Shawn and Quentin Landry, and later in life a step-brother Tim Price and step-sister Christine Hamilton (nee Price). She was by all accounts the perfect and idyllic child who had such a lust for life, and a very sweet nature that everyone quickly fell in love with. She had a magically, wonderful way about her that people saw straight away when meeting her.

The Landry family were soon on the move to Fairview, AB, where she was near her grandparents Jim and Violet Nadeau, her great-grandparents Francis Cox (Maw) and Ernest Cox (Paw), many aunts, uncles, great-aunts and uncles, and numerous cousins. She spent most of these early years spending time with all of them, playing and exploring at her great-grandparent’s farm. They rode bikes and chased the chickens, which we were all explicitly told not to as they wouldn’t lay if we scared them too much. But fortunately for us they still did lay. She even helped her great-uncle Clarence Cox and great-grandfather to milk cows and garden with her parents and grandparents. Vanessa started school at St. Thomas Moore Catholic School in Fairview.

This part of her childhood also included time spent with her other grandparents Dojie (Mimi) and Zim Landry and aunt Jeannette Clarke (nee Landry) and uncle Peter Clarke in High Prairie, AB, at a family built cabin. Spending almost every summer swimming and playing, running between family cabins, trailers of aunts and uncles and friends. Many sandcastles and trenches were dug and built alongside her sister, brothers, and cousins. With help from her cousins, brother, and sister eating almost all of the Oreo’s auntie Yvonne and uncle Reg had in their cabin. She loved the lake, and it always had a special place in her heart until the end of her life. Vanessa had the best Christmases at her Mimi and Grandpa’s house in High Prairie growing up. It was always such a special time, enjoying huge family gatherings and meals, surrounded by her High Prairie family and extended family she loved, even the Catholic Priest would often drop in because it was the place to be.

Sadly, she lost her father John (Jean) to a car accident the summer of July 1981. The Landry family then moved again to Grande Prairie, AB, to be near her uncle Glen and aunt Denise. This is where she spent the rest of her life. She was an excellent student and seem to excel at it. In Grande Prairie she attended St. Patrick’s Catholic School, then Kateri Mission Catholic school, and finally graduating from St. Joseph Catholic High School.

Vanessa’s kindness and caring nature shone through again when she decided she wanted to become a care provider for people with special needs. She went on to the Grande Prairie Regional College getting her diploma as Special Needs Provider. She worked one on one with disabled clients and then at a group home. It wasn’t uncommon to see her out with one of her clients in tow, shopping, taking them to explore, or going to the movie. She was always patient and so kind with all of them.

A curly haired, handsome fellow caught her eye when they met through friends, quickly they became close. Roger Gourlay and Vanessa married on July 3, 1993. With this she gained a wonderful loving father in-law Dave Gourlay and mother-in-law Marg Gourlay, brother in-law Bill Gourlay, and sister in-law Charlene Smith (nee Gourlay). The newlyweds bought their first house and soon welcomed their first child, a beautiful baby girl, Cassandra Gourlay, who was followed a few years later by an adorable baby boy Daniel Gourlay. They were the light of her life and when she became a mother she was the happiest she had ever been. Not a day went by she didn’t think of them or try in some way to do something for them. Birthday parties were always such fun, she always tried to make them special even making their birthday cakes. She loved Halloween and loved to dress her children up and take them trick or treating. Every year while passing out candies to all who showed up, she admired their costumes and spoke with each and everyone of them. Christmas was also special time for her and her family, always making sure they were spent with both sides of her family.

Soon Vanessa gained again more siblings when her sister Colette (Shawn), her brother Tim (Melissa), sister Christine (Chris), brother Shawn (Christine), sister in-law Charlene (Phil), and brother in-law Bill (Patti) married. She loved them all and was so happy to have them join the family.

After Vanessa married, she and Roger spent many summers at the lake with the Gourlay clan. Roasting marshmallows, fishing, boat rides, and enjoying camping at the lake. There was always time for a game of cards in the evening. Many a game was lost to the card shark that was Vanessa. One of her favourite things was Canada Day at the lake, there was always a parade, everyone decorated their golf carts and dressed up in hopes of winning the prize that year. She would always be prepared and did an amazing job organizing, and insisting many of her nieces and nephews and various other family members help.

She was a very proud aunt and loved all of her 17 nephews and nieces: Chaz, Brennan, Haylee, Paige, Abigail, Lyzi, Anna, Kennedy, Kassidy, Katie, Lucus, Hoyt, Dylan, Jessica H, Becky, Jessica B, and Darci. She was so proud of each and everyone of them and if you went to her home, she had pictures everywhere of each of them and was always adding. If you asked her about any of them, she could always tell you what they were up to. When she became a great-aunt, she was overjoyed and was blessed with 8 of them: Everleigh, Paityn, Owen, Emma, Benji, Sophie, Maple, and the newest addition to the family Mavis, who came into this world as a Halloween baby. Unfortunately, they never met but we believe she had a hand in picking her out. She loved to see the little ones, get cuddles, and give them rides on her scooter. When we talked about them, she beamed with pride.

Vanessa was diagnosed with cancer more then 13 years ago. She fought hard, trying Chemo, radiation, and numerous new and untested treatments. She always said the only thing she wanted to see was her children graduate. She did it, even seeing her daughter and her daughter’s boyfriend Sam McDermott buy their first house. Her husband Roger and mother Betty were always by her side trying to help in any way they could. Going to plays, shopping, going out for supper, or a movie. They both helped so much in different ways, and it made her so happy. As did her children who always were there to lend a hand.

We were all incredibly grateful to have had so many extra years with her and to have been in the presence of such an amazing person who shone so bright. She made you want to be a better person, never complained or felt sorry for herself, just making the best of it. She is a true role model who always brought joy wherever she was. Vanessa will be missed so terribly by all who knew her, but our sadness is a testament to how much she was loved. It means she made a huge impact on our lives and those around us, and it is and always will be one of her greatest gifts she has left us.

A Livestream of the service will be accessible 15 minutes prior to the service on Vanessa’s obituary on Oliver’s Funeral Home website.