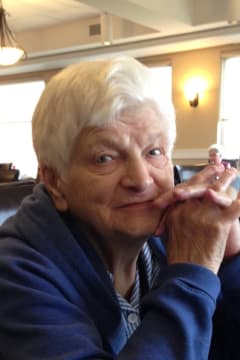 On December 27, 2021, at the age of 91, Sheila Mary Plater Young, passed peacefully, with her children by her bedside. We know that her dad, whom she had been longing to see since she was 9; beloved older brother Jimmy who died before he could “fetch her” back to England; her older sister Peggy; brother and protector Freddy; older sister Kathleen and younger brother Tommy will all welcome Mom home again. She has been trying to get to the “beach” from here for a long while and we know she has, at long last, arrived.

A lifetime ago, Sheila Mary Plater, the sixth child of Isabella and James Joseph Plater, boarded a boat to Canada. She found her calling - teaching “infant school” and declared she could not have loved her charges, the poor bairns of the Tyne Dock School, “any more even were they my own”. With a plan to see more of the World while doing the work she loved, in 1956, she left to teach abroad. Miss Plater took her first post in a tiny school in Sibbald, AB. Her younger sister, when she came to visit, advised her to “have fun but for God’s sake don’t marry one of them”. Marry one of them, she did.

In 1957, Sheila Mary Plater married John Anderson Young. With each baby she confessed, “Oh, I lied”, although she still loved her students, she could never love anyone as much as she loved her children. Three babies, and six years in Sibbald, coming from an island surrounded by people, to the Saskatchewan prairie was difficult. So, they moved to a farm outside Wembley, AB, where another baby made four. Closer to people, shops, civilization - but not the sea.

Mrs. Young, at Wembley School, taught generations to read, write, and get along. She loved the bairns of Wembley “almost” as much as if they were her own. It was not unusual to be stopped in the Co-op by former students who found themselves drawn to visit with Mrs. Young. She had a way of making you want to make her proud. She was kind and generous, proud and determined. Her acts of kindness have been revealed, years after their commission, modelling that true kindness is what we do when no one is looking. Her children would be shaped by that sense of service to others, and go on to be teachers and nurses. Two of each.

She retired in 1989; Sheila and John sold the farm and moved to Qualicum Beach, Vancouver Island, BC, where even before they had found a house, she “could finally breathe”. She was drawn back to Grande Prairie by babies, staying long enough to teach her grandkids to read, before moving back to Qualicum Beach, and the salt sea air. A late-round of grandbabies brought her to Cochrane, AB, for more “school at Gramma’s”, and then back to Grande Prairie where she remained. Her favourite child was, “the one who needs me most” and we have each been blessed with that promise.

Our Mom would never return to England as planned, however, the girl from a lifetime ago, Sheila Mary Plater, lately had been returning to England in her daydreams.

When doing their taxes we discovered that Mom donated monthly to Leprosy Relief Canada and Operation Smile, quietly giving back to little known, sort of forgotten groups of people.