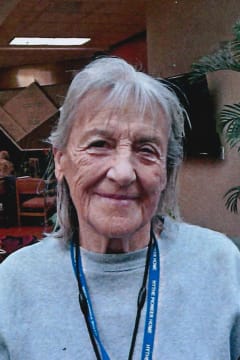 Ruby was the third child of six children: Winifred the eldest,
Elizabeth, Ruby, Albert, Esther, and William Lot; all of which have predeceased Ruby.

When Ruby was a small child, the family moved out of Hythe onto a homestead quarter in nearby Lymburn, Alberta, into a log granary until her father was able to build their family home. Ruby grew up and lived at home in Lymburn until she married in 1955. Ruby attended the Lambert School in Lymburn where she received her Diploma of Education for grade eight, the highest level of schooling available in Lymburn. From there she studied through correspondence in secretarial courses including shorthand and typing. Ruby also worked at the Gerlinger General Store in Lymburn but eventually stretched her wings and worked in Hythe at a clothing store and then at the Bank for two years until it closed down. It was at the Bank where Ruby met her future husband; William Fair of Goodfare, Alberta. However, sadly during this time, Ruby’s mother died and due to Ruby’s strong sense of family commitment, she felt she needed to take care of her widowed father. William had to wait it out for five years to marry Ruby. Finally, on January 15, 1955, William, Ruby, and Ruby’s Father drove out to Pouce Coupe, B.C., and were married at the Parsonage. No formal wedding but a true marriage to follow!

Ruby and William spent the remainder of their lives in Goodfare on the same home quarter that William grew up on. In 1976 Ruby and William registered their farm as ‘Fairway’ farms, which truly suited how they ran their farming practices. Those who were blessed to know Ruby and William during all those wonderful years have rich memories of good times together. They opened their home and their hearts to us all. They both were good farmers, good ranchers, and most of all good people!

Ruby will be missed, her big personality for such a little lady, her quick wit, her ‘all knowing advise’, her tenacity, her strength of character, her faith in GOD above, and her forever young attitude!

We could not even begin to list or know all the many friends, acquaintances, and relatives that have passed through their doorway and enjoyed good food and good fellowship. You know who you are.

Until we meet again……

A special and heartfelt thanks to all those of you, who have been there for Ruby especially after the death of her loving husband, William in 2008 and also during these past few challenging years that she has had to endure with pain. We sincerely thank you.

A Celebration of Ruby Fair’s life will be held at the Beaverlodge United Church on Saturday, November 12th, 2022at 12:00 pm. Viewing at 11:00 - 11:45 am.
Luncheon immediately following service.
The interment will be at a later date.