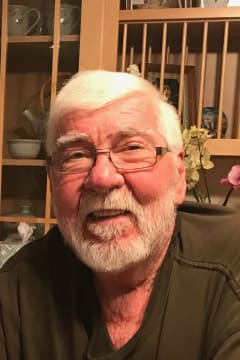 Rod Gibson, resident of Rycroft, AB, formerly of Sherwood Park, AB, and Fairview, AB, passed away on Sunday, September 18, 2022, in Edmonton, AB, at the age of 73 years.

Rod was born on January 22, 1949, in Fairview to Joe and Hilda Gibson. He had an older sister Jo-Anne (Wedman) and a younger brother Larry. Rod spent most of his youth on a farm at the top of the hill on the north side of Dunvegan Valley. He graduated from Grade 12 in Fairview. He was president of the Student Union. While he was MC’ing the Graduation Ceremony, he first spotted Bev, his future bride in the crowd. They dated for a year and were married on June 24, 1967.

Rod and Bev moved to Edmonton so that he could pursue his apprenticeship training as a Steamfitter, Gasfitter, and a Plumber. Rod worked mainly as a plumber for about 45 years.

Rod loved to joke and tease! Those who knew Rod, will each have their own personal stories about their time with him. Even when discussing what type of funeral he might like, his humour clearly showed through. He said he did not want a funeral because he did not want to subject people to egg salad sandwiches (he detested mayo and onions!).

In past years, Rob loved fishing with his sons: Patrick, Wayne, Shane, and Reed. In later years, he and Bev travelled extensively to Europe, the South Pacific, Mexico, Hawaii, the US, and China. They took approximately twenty cruises, the longest being a one-month cruise to Tahiti and Bora Bora. Rod and Bev entertained friends and enjoyed playing cards, particularly Canasta.

As per Rod’s wishes, there will be no Funeral Service.