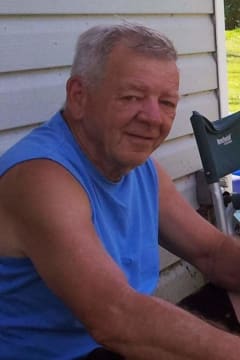 It is with deep sadness that we announce Roger Joseph Patrick Leblond, passed away peacefully with his family by his side on Sunday, June 26, 2022, after a 4-year battle with cancer, at the age of 73 years.

Roger married the love of his life, Brenda Villeneuve on April 25, 1975. They had two children, Crystal and Nicole, who were his pride and joy. He was also blessed with four amazing grandchildren: Skye, Ronin, Phoenix, and Haydn. He was a very proud Papa! As a devoted father, he took his girls to Quebec to meet his family. Later took his grandchildren to Disneyland, and he enjoyed the trip immensely.

Roger loved to camp, fish, hunt, play crib and horseshoes in the summertime, gardening, and woodworking, and spent many summer weekends at the lake with his grandchildren and daughters. He loved whatever he was doing and excelled at it. Roger touched many people in a positive way. He was a loving, kind, generous, and a hard-working man that was devoted to his family. He was thoughtful and lived his life with honesty and integrity.

At an early age, Roger joined the military spending time in Quebec, Germany, Edmonton, and Petawawa, ON. He spent many years in the military as an Airborne Instructor of which he was very proud of.

When Roger retired from the Forces, he, Brenda, and the girls moved to Peace River, AB, where he became an entrepreneur as an owner/operator of The Malt Shop in the mall. When the Peace River Mall flooded, he and Brenda moved to Keg River country and started a successful Potable Water business (Roger’s Water Service), with eventually 4 water trucks.

We will all miss this amazing man with all our hearts. We have been blessed to have had him in our lives for all these years. His unconditional love for us will carry us thru the hard days ahead. He will always be in our hearts, and we will love him forever.

Roger was predeceased by his mother Geraldine; father Gabriel; as well as brother Yves.

The family would like to thank the many families and friends for their outpouring of love and support during these very difficult 4 years. They would also like to thank all the Health Care workers: Doctors, Nurses, Etc., for the compassionate care extended to Roger. The Palliative Care unit in Grande Prairie was amazing in their compassionate care of Roger and the family. They went above and beyond, and for that, they are so very thankful.

A private family Graveside Service will be held on September 4, 2022, at the Smith Cemetery in Smith, AB.