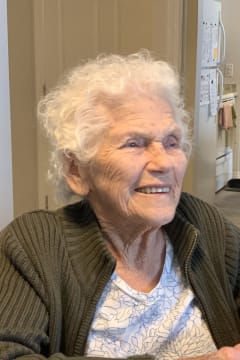 Otilia Helen Salacki, or as she was affectionately known Trudy, Mom, Grandma and friend, entered into eternal rest on Monday, July 18, 2022, at the Grande Prairie Regional Hospital, in Grande Prairie, AB, at the age of 96 years.

Trudy was born on July 15,1926, in Rutka (near Suwalki), Poland, to Adela and Adolf Pinsch. In 1931, she immigrated with her mother and older sister to the Teepee Creek area, where she arrived on her 5th birthday, to be with her father who had come two years earlier to establish a homestead.

Trudy grew up on a farm and attended school in the Webster area. After she finished school, she worked as a waitress at the Weiker Hotel in Sexsmith, AB, until the owner’s (Pondick’s) decided to vacation in the USA. She rode with them part way and then carried on to the Maryland and Pennsylvania areas to visit her 5 aunt’s and their families. She spent 6 months getting to know her relatives before returning to the Webster area.

Trudy met Wesley Salacki through her older sister while he was working in the area. Wesley and Trudy were married on January 18, 1949, then purchased a farm and continued to live in the Webster/Sexsmith area until retirement.

Life on the farm was hard work, but Trudy was always up at the crack of dawn, cooking, baking bread/buns, doing chores, fixing fences, and doing many other things for her family. Trudy gave birth to 9 children. At night when her family was asleep, during what she classified as her quiet time, she would crochet or knit, make berry preserves, and sprouted seeds for planting, as she loved watching things grow. Her plentiful garden and endless canning provided year-round essentials, which the family much enjoyed. She also enjoyed caring for and feeding all types of baby birds and animals and absolutely anyone who happened to drop by.

As community members, Wesley and Trudy enjoyed playing cards with neighbours and attending community functions, especially Webster dances. They were instrumental in forming the Webster Cemetery Maintenance Association and also were active members of the local Polish Community.

Trudy was very active with the Sexsmith CWL for 55 years. Trudy’s tremendous faith and trust in God have helped her navigate numerous hardships and grief. She enjoyed various crafts, gardening, and could frequently be found cooking on many occasions for family and friends. In retirement, Trudy and Wesley turned over the family farm to their son Ken and purchased a house in Grande Prairie, but that only lasted for five years, when they purchased another rural residence, where she continued to reside until her passing. The one thing that has outlived her, is her drivers license, which she immensely valued.

Trudy enjoyed spreading her wings and had travelled to Poland, Hawaii, Alaska, Baltimore, Mexico, Dominican Republic, camping throughout the Western Provinces, and also took a few organized bus trips through the USA, where they met several lifelong friends.

I’d like to extend a heartfelt thank you to Mom’s granddaughter Leanne and neighbour Lynn with her daughters, for the unwavering support, love and companionship, which Mom cherished over the years. Also, the care and empathy shown by the Doctor’s and Staff in Unit 12 at GPRH, and the long-lasting comradery provided by the ladies of the Sexsmith CWL.

A Funeral Mass will be held on Friday, July 29, 2022, at 11:00am, at Immaculate Conception Catholic Church in Sexsmith, AB. Interment to follow at Webster Cemetery.