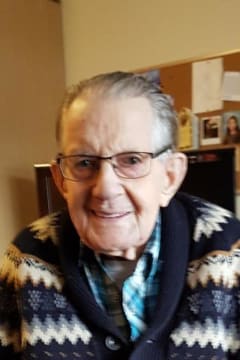 Lyle Trevelyan Gerow, resident of Grande Prairie, AB, passed away on Tuesday, December 21, 2021, with his loving wife Fay by his side at the Grande Prairie Regional Hospital, at the age of 95 years.

Lyle was born on June 19, 1926, in Melfort, SK, to Archibald Gerow and Annie Gerow and resided in Beatty, SK, till the fall of 1929. His parents moved to a homestead just south of the Wapiti River, AB. As a young lad, Lyle attended school from 1936-1944, and in his words, he was “learning about the world”. Lyle was a hardworking young man and never shied away from the opportunity to lend a hand. In the fall of ‘42, he worked on a harvesting crew for local threshing machine operator and made a whole $19.00 and thought he was rich. He then went into a logging and sawmill camp until late February 1945.

March 7, 1945, he went to Mewata Barracks in Calgary, to join the Canadian Army and was sent to Camp Borden, ON, for basic and advanced training. He served on active service with the Canadian Army during World War II. Though not one to boast, he answered the call of duty with the upmost integrity and honor as he stepped up to serve as his brothers did, and was willing to die for his country and fight for freedom. The war was over soon after so as he always said; “I spent 1½ years, marking time”, and was discharged in October 1946.

When the War ended with brothers Keith, Lloyd and Tom home from the army, Lyle stepped in to help Keith clean up a 14 acre field of roots in 1947. He bought land in 1948, and farmed from 1948-1953. The struggle was real as there were times that there was little or no crops yielded. In 1953, he rented the farm out to his sister and moved to Grande Prairie where he did numerous jobs, falling trees, and liftman for Canfor sawmill. Then he was back to the farm in 1962, where he worked the land, then sold the farm in 1995 and moved into Grande Prairie where he retired.

Never idle, he was a master builder and was always willing to lend a hand with many of their projects. He truly had a creative mind and could build something out of nothing. Lyle had a love for sports and curling, which he and mom loved to watch. He played in the bowling league and travelled to tournaments and won a trophy or 2. His love for golf didn’t go unnoticed as he won 2 “Holes-In-One” and got a couple nice cheques and pictures taken (he was a celebrity)!

Lyle was a bachelor most of his life, although we believe he had an eye for one of the 7 Watson girls (this was not unlike the Gerow boys who married 2 of them). In 1996, Lyle and Fay Anderson (nee Watson) started up a beautiful friendship. He would wine and dine Fay and her mother Isabel Watson to a Friday night at the Dragon Palace. Lyle and Fay spent many Saturday nights playing what I would call “Tournament Scrabble”. They were both armed with dictionaries ready to outdo the other with their spelling and vocabulary, which eventually led to marriage on May 7, 2011. Lyle then 85 years young and his bride Fay of 67 years. Lyle then became a father of 2 and Grampy to 5 grandchildren and 3 great-grandchildren. It was love at first sight for all the grandchildren. Grampy was so loving, kind, and gentle, treating each one like a treasure. They gave him the greatest joy, smiles, and laughs, as he loved all without condition.

A video of the service will be available to watch 2 days after the service.

We would like to thank our family, friends, palliative care, and home care; Dr. Brigett Von Dewitz, Dr. Pope, Dr. Valentin Duta, Joy, and all the nursing staff at the hospital for all the care dad received during his final days. Your kindness and support were greatly appreciated. 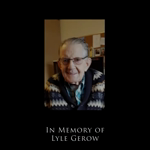