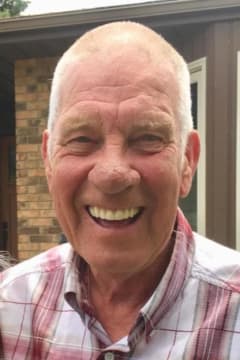 It is with profound sadness that the family of Keith Roy Lange, resident of Grande Prairie, AB, announce that he passed away on Tuesday, September 6, 2022, at the age of 74 years.

Keith battled with serious medical issues in recent years, but just like he dealt with all experiences in life, he managed his illness with strength and grace, and wanted to spend as much time with his loved ones as possible. On his final day, he was surrounded by his family, whom he adored more than anything else in the world.

He was born to parents Edward and Jean Lange, on July 4, 1948, in Brandon, MB. Keith had a lifelong love of hockey and sports, especially being a goaltender. In 1967, he left the Brandon Wheat Kings to play for the Geraldton Goldminers, where he met the love of his life, Sarah (nee Weedmark). In 1971, Keith and Sarah married and raised 2 sons together.

Keith worked at various grocery stores until 1979, where he began his career with ERCO in Thunder Bay, ON. During Keith’s 28 years with ERCO, he embraced the opportunity for new experiences and operated or managed their plants in Thunder Bay, Grande Prairie, Valdosta, Georgia USA, and Fort Saskatchewan, AB; as well as spending several months in China. Following his retirement in 2007, he worked part time for Aquatera Utilities in Grande Prairie.

Everyone that knew Keith felt his big heart and giving nature. He was a man who was known for his keen sense of humour and the unofficial king of one-liners. Keith’s antics were legendary, and those that knew him have their own stories to tell, usually with some parental discretion warnings. He was a self-described social butterfly that loved meeting new people and had a unique way of making children laugh. Keith’s selflessness and compassion for others was endless and if you needed help, he would be there without hesitation.

Anyone who knew Keith knew that he was the most loving husband, father, grandfather, sibling, and son a family could ask for. He shared this same love with his community of friends, professionals, and acquaintances spanning across the globe. The world is a little less bright now without him in it.

Keith is survived by his loving wife of 51 years, Sarah; children Gordon (Michelle) of Saskatoon and Patrick (Pam) of Grande Prairie; 4 grandsons: Cameron, Griffin, Ethan, and Jacob. He is also survived by his brother Brian (Noreen) of Brooks, AB; as well as his sister Sharon (Gord) of Brandon, MB.

He was predeceased by his mother and father.

Following his wishes, cremation has taken place and there will not be a formal memorial service. Those who remember Keith are asked to celebrate his life in their own way. Raising a glass of their favourite drink in his memory, or praying that the Montreal Canadiens win the Stanley Cup would be quite appropriate.

In lieu of flowers, memorial donations in Keith’s memory may be made to the Brain Aneurysm Foundation of Canada (1165-2255B Queen Street East, Toronto, ON, M4E 1G3).