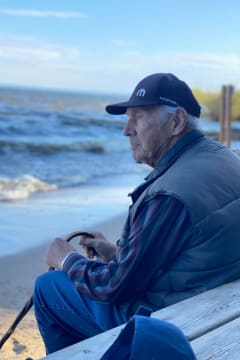 Gerald Potter, resident of Clairmont, AB, passed away peacefully in his sleep at the Grande Prairie Regional Hospital on Thursday, December 30, 2021, at the age of 86 years.

Gerald lived a life full of music, a family talent, and was playing in a band at the Lakeview Lodge. As a young man, he had dreams of being a jet fighter pilot which led him to own and fly his own plane in later years. A jack-of-all-trades, he was often referred to as Gyro Gearloose by his children and seen in coveralls, tinkering with carpentry, plumbing, or anything mechanical. His restored International Harvester truck appeared in the Spirit River Canada Day parade and his woodcraft adorned the homes of relatives and his granddaughter’s classroom. He was also an avid curler and a regular bonspieler in the many communities in which he lived. Many will remember his legendary sweet tooth and his love of being a gentle giant who played with small children.

He was predeceased by his parents John and Nellie Potter; brother Ronald Potter; sister Darlene Adair; as well as grandson Matthew Potter Goodine.