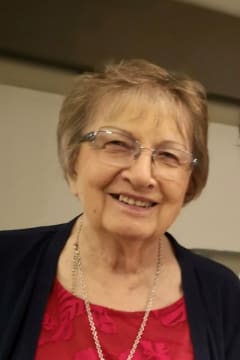 It is with great sadness that we announce the passing of Jean Kowalchuk, on Tuesday, November 16, 2021, in Spirit River, AB, at the Central Peace Health Complex Hospital after succumbing to cancer, at the age of 86 years.

Jean was a mother, grandmother and great-grandmother to our family, but had been known to other people in her life as “Baba”, as she had collected many people under her wings over the years.

Jean was born in May 1935, in the Greenway area north of Rycroft, AB, to parents Peter and Ahafia Smakula, and was the second youngest of her four siblings. She grew up on the family farm and went to the local Greenway school in her early years, and then after high school attended the University of Alberta to obtain her teaching degree. Upon graduation, in 1955, her first teaching job was at a one room schoolhouse at the Ksituan School in the Devale, AB, area. It was an interesting time as she often was not much older than some of her students.

It was at this time in her life that Jean met her future husband Victor. They married in July 1955, and had four children: son David, daughters Karen and Kim, and son Greg. While helping Victor with the operation of the farm, Jean taught school at Blueberry Creek between 1956 - 1977, and then until 1990 in various roles, either full-time, part-time, subbing, and then later in her career, her favorite group, kindergarten.

In 1977, she and Victor started their business V & J Small Engine Repair in Spirit River along with their son Dave and made it into a family business. After being in business for many years, they sold the business, moved off the farm into Spirit River and retired.

Over the years, Jean loved to square dance, paint, garden, read and travel. She enjoyed singing in a Ukrainian singing group as she was quite musically inclined. She also was actively involved in the Hospital Auxiliary for many years. She was involved with her sister Marie in a fundraiser to donate a “Jaws of Life” to the Spirit River Fire department, and she organized the 2006 Blueberry Homecoming.

Over the years Jean and Victor hosted many family events and accumulated a number of new “family” members who have been a part of their lives for many years. Because of this, Jean was known to quite a lot of people as “Baba”. She enjoyed meeting new people and was always happy to add to her circle of friends.

Our family would like to extend thanks, especially to Betty Sopkow, Mom’s dear friend for all her help and support, her friends at Grandview Estates, Dr. D. Wolfaardt, the nursing staff at the Central Peace Health Complex Hospital in Spirit River, and too many others to mention here who helped make her days easier, especially during these last few months.