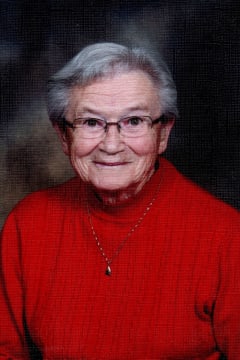 Elza Stefan was born May 25, 1925, to German parents, Gottfried and Lydia (nee Schultz) Stefan, in Podglemboki, Poland, and baptized in Chelm, Poland. Elsie, her parents and two brothers, Sigmunt and Otto, grandmother Julianna Schultz and Lydia’s cousin, Ferdinand Schmitke immigrated to Canada in 1929, departing on the S.S. Lituania from Danzig, a German Free State on July 4th, arriving in Halifax, NS, on July 21st. They then travelled by train, passing through Edmonton on July 26th, before arriving at Wembley, AB.

Elsie attended St. John’s Lutheran Church and school, near Huallen where she met her husband, John Heikel. Though they were acquaintances from a very young age, it was through a later, shared love of baseball and farm life that their friendship blossomed. Elsie and John were married on March 1, 1946, at St. John’s Lutheran Church. They raised their four children: Melvin, Lorraine, Bernice and Diane; while farming first with John’s parents, Jakob and Katherina, and in later years with their son, Melvin and his wife, Sherri. They remained active in St. John’s Lutheran throughout their lives, where Elsie taught Sunday School and was a member of the Lutheran Laymen’s League and Lutheran Women’s Missionary League.

Elsie enjoyed working beside her husband John, playing an active role in the day-to-day operations of their mixed farm. She especially enjoyed tending her vegetable and flower gardens. Elsie and John shared a love for camping, fishing, curling, picking blueberries and travelling. A highlight of their travels together included a trip to the Toronto Royal Winter Fair. After John’s passing, Elsie continued to travel. Visiting Pier 21 in Halifax to view documents of her family’s entry to Canada was another favourite travel memory, as well as a trip through many European countries with her daughter, Bernice. Elsie met with many German and Swiss cousins and visited her daughter, Diane and husband Arthur and sons, Stephen and Ryan in Vienna, during Arthur’s sabbatical in Austria. At almost 80 years of age, Elsie climbed the 100+ stairs to their fifth floor flat, several times each day.

Weary now, I go to rest,
Close my eyes in slumber blest.
Father, may Thy watchful eye
Guard the bed on which I lie.

Due to COVID-19 restrictions, attendance is limited to family. Masks and double vaccinations are required.

Memorial Donations in memory of Elsie, may be made to the Lutheran Hour Ministries (270 Lawrence Ave., Kitchener, ON, N2M 1Y4).