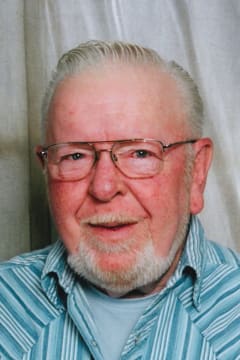 Clifford “Cliff” Neil Chappell, resident of Grande Prairie, AB, formerly of Gimlet, AB, passed away on Wednesday, November 17, 2021, on his 78th birthday, at the QEII Hospital with his wife and daughter at his side in Grande Prairie.

Cliff was born in Eckville, AB, on November 17, 1943, to Stuart and Laura Chappell. He was probably born with a steering wheel in his hand. During his pre-school years he became mama’s little helper and became quite proficient at knitting and decorating quilt blocks. Those blocks were later put together by his mother and that quilt still graces our home. Cliff attended Gimlet school up to grade 6. His interests during that time were in the 4-H club he belonged to and pestering his sister Caroline. Caroline, being the oldest and more experienced, felt she should be in the driver’s seat as they made their daily journey to school. Mostly he wanted to be in the driver’s seat, even on horseback. After grade 6, he then attended Lesliville school, and finishing at David Thompson High School, but he couldn’t drive the school bus either. After his school days, he moved to Calgary, AB, and joined the Militia for a short time. While he lived in Calgary, he was employed by Houston Trucking where he drove a gravel truck and operated a caterpillar. He was happy doing anything he could find as long as it allowed him to drive, be it a gravel truck, milk truck, or a logging truck.

Of course he also liked to sing, dance and play his guitar. It was at this time he met Fay Cummings. She was a singer with the Taylor family band called the Silvertones. But at the time, he was dating Fay’s sister Sandra. Fay quickly decided she wanted this red-haired, freckled, guitar playing and singing honey for herself. After paying Sandra two weeks of her allowance, she got him!! On July 9, 1965, Cliff and Fay got married and started their life together in Rimbey, AB. Cliff drove school bus and worked at Roper’s Farm Implements, assembling machinery. After a few weeks, he went to work for Cardinal Coach Lines driving from Rimbey to Red Deer, AB, and to the Rimbey Gas Plant. In 1969, Cliff took a job for Grimshaw Trucking, hauling freight from Edmonton, AB, to Yellowknife, NT. Cliff and Fay moved to Grimshaw, AB, for a short time, then in 1973, they moved to Calgary where he took on a scheduled run with Grimshaw Trucking from Calgary to Edmonton.

On July 2, 1977, Cliff and Fay adopted a baby girl Crystal Laureen. In 1980, they returned to Grimshaw and then moved to Grande Prairie in 1985, where he resided till his passing.

In 2005, after working for Grimshaw Trucking for 35 years, Cliff bought his own truck and became a proud owner/operator of the “Blue Lady”, which he continued his run from Grande Prairie to Edmonton with Grimshaw Trucking.

In 2013, Cliff retired from driving, and he spent his retirement fishing, playing cards and spending time with family and friends. Many hours were filled with visiting and enjoying newly found friends at music jamborees. He became an active participant at the Clairmont Sunday Night Jam Sessions.

He was predeceased by his father Stuart Chappell; mother Laura Chappell; sister Caroline Maddox; as well as nephew Joel Maddox. 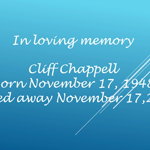