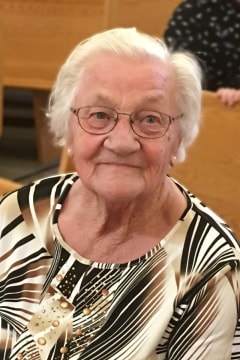 Bertha Schoorlemmer, a long-time resident of Rycroft, AB, passed away in St. Albert, AB, on Thursday, September 15, 2022, at the age of 92 years.

She was born in Raalte, Holland, and spent her early years in that area. She married Herman in the spring of 1957, and together with Herman’s brother Henry and his wife Gerda, they emigrated to Canada. For several years they worked on a dairy farm in central Alberta. In 1963, they moved to the Rycroft area to establish their own dairy farm.

Bertha is characterized by her kindness, her strong work ethic, her faith, and love of her family. Children never failed to brighten her day. Many people were the recipients of her thoughtfulness and friendship. Bertha was actively involved in the church community and was a volunteer with the Catholic Women’s League in Rycroft for many years.

After Herman died in 2003, Bertha continued to live on the farm that she loved, until the age of 91. In August 2021, she moved into the St. Albert Retirement Residence, where she passed away peacefully.

A Funeral Mass will be held on Thursday, September 22, 2022, at 11:00am at St Peter and Paul Roman Catholic Church in
Rycroft. Interment to follow at Old Mission Cemetery.